4 Tips for Traveling as a Single Parent 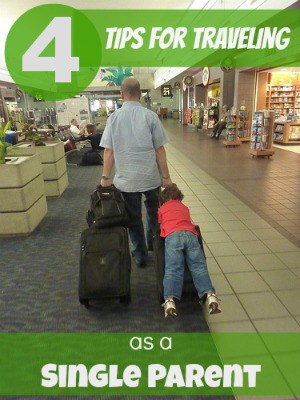 We had our first experience traveling as single parents recently. As I talked about previously, due to an expired passport we split up and traveled to Canada separately. One parent traveled with one girl via plane, the other with one girl via car.

Since we’re both used to traveling with the other parent in tow, there were some learning curves thrown our way.

1)      Restroom breaks. This was a biggie for both of us. I traveled via plane with Grace, and had to haul our luggage with us into the restroom stalls at the airports. Traditionally when traveling with William, one of us stays with the luggage while the other goes to the restroom.

2)      Document Management.  This was more of a dilemma for me than William. I’m used to him keeping track of our boarding passes and passports, but traveling alone meant I had that responsibility. I had to figure out where to store them, and when to have them ready for security/gate agents.

3)      Departure Scanning.  Whenever you depart from one area to go somewhere else, you should scan. Traveling with kids makes this especially important. When you’re traveling as a single parent, you don’t have that other person to make sure you and/or the kid(s) didn’t leave something sitting on a bench/in the plane seat pocket/on a counter. You have to allow a little more time and be organized to make sure nothing gets left behind during your travels.

4)      Entertainer.  Traveling as a team means you can tag off as the kid entertainer. Traveling as a single parent means you’re the main entertainer and listener. This was especially evident for William as he traveled 19 hours each way with Faith via car. He’s used to driving but I’m there to listen and respond to her sweet ramblings. Not so this time. Just be prepared to be the primary source of engagement for your kid(s) if you’re the only parent they’re with.

I hope this will help you think through some things if you’ll be traveling alone with your kid(s). Are there any tips you’ve picked up or figured out during your time traveling alone? Share your thoughts below.

Next →
Cash + Miles: A Way to Save Money on Your Family Vacation
Click here to cancel reply.