My Best Mickey’s Not So Scary Halloween Party Tips

Arrive early! Be at the turnstiles around 4 pm for early entry into Magic Kingdom

I attended the event in September, and the party was sold out when we arrived at the gates. Thankfully we had pre-purchased our party tickets in advance. The party requires an additional ticket, it’s not included in your park entry ticket.

If you order online, you can easily add the party ticket to your My Disney Experience account and it will link to your ticket/magicband. The party tickets range in price starting at $79 (for adults) and higher for prime dates. You save $10 if you buy your tickets in advance.

One perk that isn’t widely disclosed is that your party ticket grants you park access earlier than the party start time. The party begins at 7 pm, but you can enter the parks at 4 pm. I would even say it’s worth being at the turnstiles by 330 pm. This means you can experience a bit of Magic Kingdom without buying a ticket for the day.

If you’re already in the park, you’ll need to go get your party wristband at a special station inside the parks. The wristbands are how they know who gets to stay in the parks after the 7 pm party start time.

This was my biggest ah-ha moment and by far my BEST TIP for Mickey’s Not So Scary Halloween Party. After the first parade, I noted a lot of families heading out of the park, then after the fireworks, another mass exodus occurred. This is the time to party!

We hit a candy trail when the party first began and waited about 15 minutes to get about 4 pieces of candy. After the fireworks, we were strolling right up to candy buckets. The party lasts until midnight, so I highly recommend you stay until the end to maximize your party time.

Get a Halloween Party Map & Schedule

When you arrive in the parks, there are special maps at the entrance just for the party. Be sure to grab one of these. They will show you all the special character meeting spots, the trick or treat trails, and the ever important entertainment schedule.

Check out my Guide for What Happens at Mickey’s Not So Scary Halloween Party!

Part of what makes Mickey’s Not So Scary Halloween Party so great is the special entertainment offerings that only happen for the party.

Boo to You Halloween Parade at Walt Disney World

People started claiming spots early for the first parade, I highly recommend the second if you’re able. Also, if you end up on Main Street, know that the party will take about 20 minutes to get to you from where it started at Splash Mountain.

Hocus Pocus Villain Spectacular: a stage show that occurs in front of the castle and features the witches from Hocus Pocus and some of your favorite Disney Villains.

While a stage show makes you think you should be up front, I think standing further back around the hub might offer a better view. 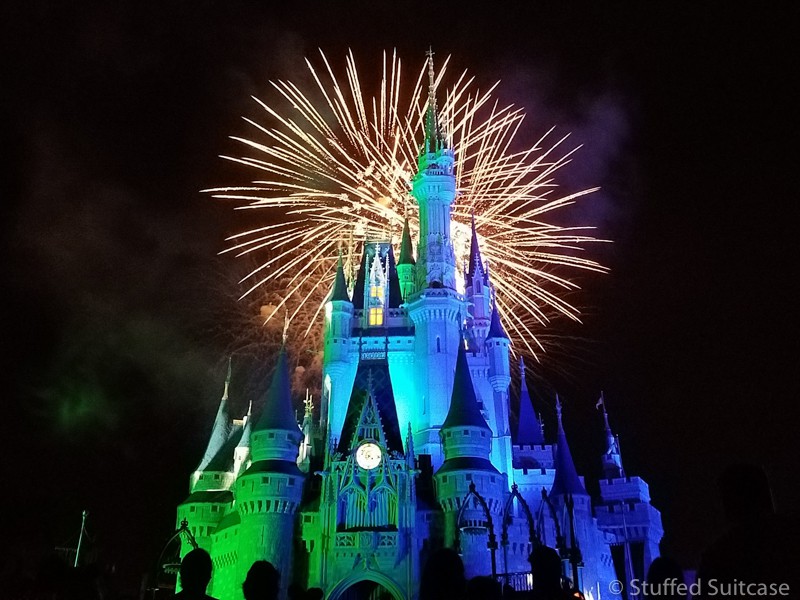 NEW! Disney’s Not So Spooky Spectacular Fireworks Show: a great show of fireworks and fun projections on the castle. Jack Skellington hosts this not so scary-tale. Mickey, Minnie, Donald and Goofy are spirited away to a mysterious haunted house where they encounter dancing skeletons, waltzing ghosts and a sinister gathering of Disney villains!

Seating with a view of the castle is great so you can see the projections, but I highly recommend you sit off to the left side (when facing the castle from Main Street). Jack Skellington is the host for the show, and you’ll miss his projection if you’re sitting in front of the castle. Missing his speaking takes a big part away from the show.

People were dressed up a lot at the party, dressing up isn’t just for kids. The hot and humid weather though made me feel quite bad for a few costumed patrons. Make sure you read the costume rules that Disney has listed on the Halloween party page before planning your outfit. And, make sure you take into account the possible hot and humid Florida weather. You also shouldn’t feel like you need a costume, I wore a cute Disney Halloween shirt.

There are crowds. Especially on a sold out party. Plus there are a variety of activities you can enjoy. There’s trick or treating, dance parties, character meets, special food options, limited edition merchandise, surprise photopass photo options, plus the entertainment. You can’t possibly do it all. I highly recommend you make a plan of what you most want to experience.

You don’t have to hit all the candy trails. Character meet lines are long, so pick your favorite. There are no fastpasses and not all rides are open, so I recommend using the party to experience the special attractions and make it less about the rides. After the fireworks is a great time to hit some rides and treat trails. Read about how Disney has special trick or treat options for those with allergies.

Even with the crowds, I had a great time at the Party. I attended with some friends, and I can see that it would be harder for families to get the most out of the party. Staying late, after the fireworks, is truly the best way to make the most out of the event. Arrive early for some rides, hit a treat trail, meet a character, then catch all the entertainment shows. Afterwards, do a final sweep for attractions and treat trails, then head home.

Tips for Mickey’s Not So Scary Halloween Party.

The best tips to help you make the most of Mickey’s Not So Scary Halloween Party!

Next Halloween I will visit Disney World with my family. This is my 3rd time visit but first for the Halloween party. I think your post will help me to make great vacation. Thanks for sharing

We just attended the Not So Scary Halloween Party tonight, and I can honestly say that it was THE biggest waste of money I've ever wasted at Disney (or anyplace). We were planning on doing Disney next year for Christmas, and now I know better than to buy tickets to the Very Merry Christmas Party!

The Boo to You Parade was nice....IF you could see it. We grabbed a spot early, but people just kept shoving their way in front, so our viewing was gone. We did do the Trick-or-Treating, but unfortunately we followed the advice of many bloggers who said to do that later. WRONG! After the 1st Boo to You Parade, the treat locations we went to were closed. Gone. Not there.

Disney won't let you make any Fast Passes after 7 because (in theory) the rides aren't supposed to be bad to get onto, so you don't need them. WRONG! Some of the rides had a wait time of an hour or more.

Haunted Mansion is supposed to be done up special for Halloween, featuring The Night Before Christmas. WRONG! It's the same as it is any day of the week, any month of the year.

I couldn't really see anything different that made it worth over $100 for one adult and one child. I can't even fathom paying for a larger family! The park was every bit as crowded as if it was any other day. And we didn't see any of the s0-called special characters that are only out for the party, other than Tarzan and Jane.

Hi Peg - thank you for your honest comment and report. I'm so sad to hear about your experience! That's terrible that people were able to crowd in front of you for the parade. Were you standing at the curb and they stood in the street? That's so sad to hear since it is a fun parade to watch! We went through many treat trails late and didn't find any that were closed. I wonder if that's a new thing they're doing? That's terrible! The Haunted Mansion Holiday only happens at Disneyland, not at Disney World. I agree that the Halloween parties are so busy now that it makes no sense to take away fastpasses. Offering fastpasses could make a huge difference to helping with ride lines during the party time. I guess it might take some special programming to only give fastpass times after 7 to people who have MNSSHP tickets, but I'm sure they could figure it out! Sorry again to hear you had a bad experience. I hear you on it being an expensive event, so it really should be worthwhile!

8 Disney VIP Experiences Worth Splurging On

[…] 4 — Seasonal Events / Mickey’s Not-so-Scary Halloween Party — There are many seasonal events throughout the year that require an extra ticket, such as the Mickey’s Not-so-Scary Halloween Party going on now. While you need a ticket to the party, you don’t need a ticket to the park. So this is a good day to enjoy the pools or resorts and head to the park in the late afternoon for the party. Everyone else needs to leave except those there for the Halloween Party, and everyone gets a chance to dress up (even the grown ups who aren’t allowed during the day!) We just went through a lot of tips for visiting during Disney for Halloween on the Vacation Mavens podcast, and my friend Kim has some good insight into enjoying the party even if you have food allergies. […]

Insiders Guide - What to Do in Orlando, Florida

[…] If you want to experience Halloween at Disney, check out this useful guide.  […]

Disneyland and Legoland for Halloween... Are they worth the Money?? | Global Munchkins

[…] I have yet to visit Halloween Time at Disney World but I loved this fantastic post about all the fun activities going on in Orlando. Check it out! […]