It’s no wonder that Orlando, Florida is considered the theme park capital of the world. With so many great family theme parks in the area there are plenty of options for getting immersed in the land of thrills and make-believe. One of our family’s favorite theme parks is the Universal Orlando Resort. If you’re planning a trip, here are my best tips and tricks for buying tickets, navigating the parks, and the best rides at Universal Orlando.

One of our favorite things about Universal Orlando is all of their great thrill rides.Universal Studios Florida has many attractions based on popular movies. We love all the 3D thrill rides where you wear 3D glasses and get really immersed in the action.

Join Gru, his daughters and the mischievous Minions on an unpredictable 3-D ride: Despicable Me Minion Mayhem™. Your journey starts in Gru’s home, where you’re recruited for his latest scheme—one where you’ll become an actual Minion. But when things don’t go as planned, you’re launched into an unforgettable trip through his super villain laboratory.

If you’ve ever seen the movie E.T. you’ve probably wished you could ride one of those flying bicycles across the sky. Now’s your chance and there’s no time to waste because E.T. needs your help. His home planet is dying and only you can help him save it.

Join the Fast & Furious family for a full-throttle, high-octane experience where you’ll be immersed in heart-pounding action alongside Dom, Letty, Hobbs and the rest of the crew. You’ll meet up with the team and check out iconic vehicles and memorable locations from the films. Just as the party is getting started an enemy infiltrates your location and a wild chase ensues.

This is one of our tween & teens favorite rides at Universal Orlando! Adrenaline pumping and music thumping, you’ll climb straight toward the sky at a 90-degree angle. After the first ferocious drop, you’ll tear through the track, reaching a blistering 65 mph. 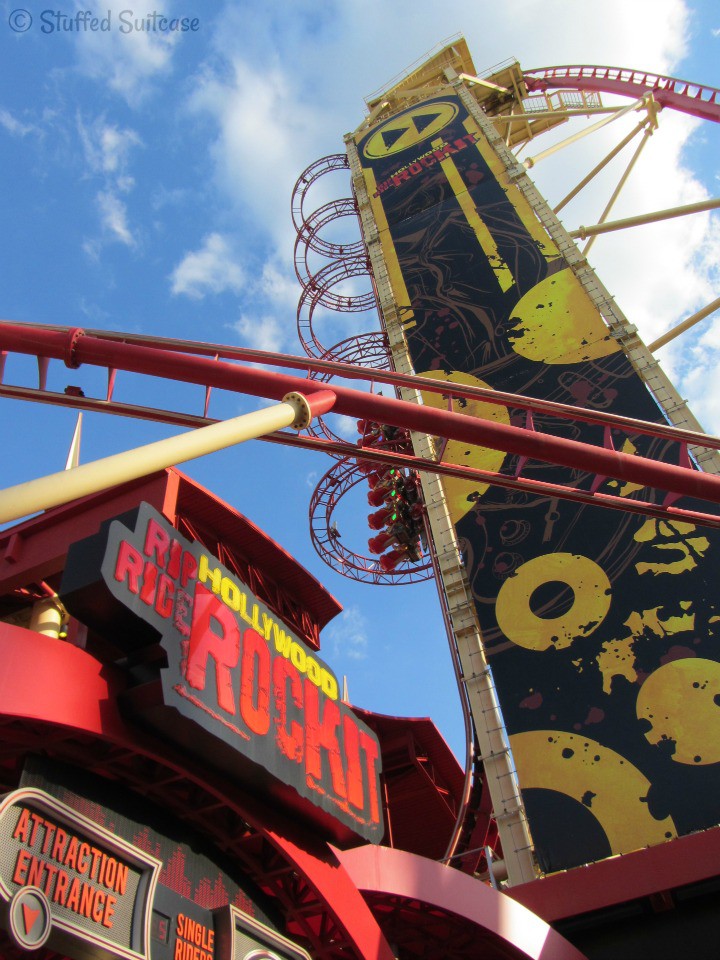 So many great thrill rides at Universal Orlando, like Hollywood Rip Ride Rockit!

Pilot your very own flying saucer, swooping up and down as you circle one of the animated alien fiends from Rigel 7. You’re starring in your own Treehouse of Horror alongside outer space’s most famous slimy, green creature.

New York has been hit by an epidemic of aliens and it’s up to you, Agent Trainee, to blast them into oblivion. You’ll need a good eye and steady hand on your laser gun to zap those little suckers at just the right second.

Our recent trip was our first experience of this new attraction. It’s good to note that there are two “pre-show” areas before you actually get to the “ride”. The first is a memorabilia hall where you can see fun Tonight Show history. The second is made to feel like you’re in Studio 6B, where The Tonight Show is filmed. After these two areas you finally head into the theater where you experience the 3D race against Jimmy Fallon through, below and above New York City.

Behold the mini movie that takes place after the first Shrek and before the second. Lord Farquaad has returned (in ghostly form) to Far Far Away. He’s kidnapped Princess Fiona, and Shrek and Donkey are hot on his trail. You’re along for the ride, watching it all unfold from your cozy seat.

Grab a seat with The Simpsons™ on a virtual reality roller coaster ride. As the journey begins, someone is sabotaging Krustyland, Krusty the Clown’s low-budget theme park, and you’ll smash and blast through the park with Homer, Marge, Bart, Lisa and Maggie in an over-the-top non-stop adventure. Don’t worry. We’ll try to get you back in one piece.

Board your N*E*S*T* vehicle and join Optimus Prime and Bumblebee in an ultra-immersive, next generation thrill ride that blurs the line between fiction and reality. You’ll fight to keep the AllSpark out of Megatron’s hands in an explosive battle between the Autobots and Decepticons.

Who better to ease first-timers onto the track than that wacky woodpecker, Woody? This thrilling kid-friendly coaster gently swoops and turns through Woody’s very own nut factory, filled with silly puns and corny jokes. It’s all the fun of a classic coaster without any daredevil drops. The ups and downs may be small, but the smiles are huge for both kids and parents alike.

Harry Potter and the Escape from Gringotts

One of our favorite rides at Universal Orlando, and a great example of the excellent 3D ride technology Universal utilizes. Enter Gringotts™ bank beneath the massive fire-breathing dragon at the far end of Diagon Alley™. Inside, walk through the bank’s grand marble lobby and see goblins hard at work. Then, get ready to take a journey through cavernous passageways that lead deep underground as you climb aboard this mind-blowing, multi-dimensional thrill ride.

You’ll face the bank’s stringent security measures while navigating perilous subterranean vaults. Along the way you’ll encounter Harry, Ron, and Hermione. But you’ll have to evade the wrath of malicious villains Voldemort™ and Bellatrix, as well as trolls and other creatures that stand between you and a safe return to Diagon Alley™.

The Wizarding World of Harry Potter is used to describe two lands of attractions in the two theme parks at Universal Orlando Resort. Hogsmeade is in Islands of Adventure. Diagon Alley is in Universal Studios Florida. This is not a separate theme park and entry is included in your admission to the Islands of Adventure or Universal Studios Florida theme park. The Hogwarts Express train takes guests with park-to-park admission tickets from Hogsmeade to Diagon Alley and vice versa. Note, you MUST have a park-to-park ticket.

The Hogwarts Express experience combines powerful storytelling, live special effects, lifelike animation and state-of-the-art technology to take riders on the journey of a lifetime.  Guests will enjoy two completely different experiences depending on whether they’re traveling to Hogsmeade or London.

Another theme park based on movies, but arranged in “lands” or “islands” with attractions themed around a main theme. These “islands” include The Wizarding World of Harry Potter™ – Hogsmeade™, Marvel Super Hero Island, Jurassic Park, The Lost Continent, Seuss Landing™, and Toon Lagoon. Some of our favorite attractions were Harry Potter and the Forbidden Journey™, Jurassic Park River Adventure, The Amazing Adventures of Spider-Man, and Poseidon’s Fury. 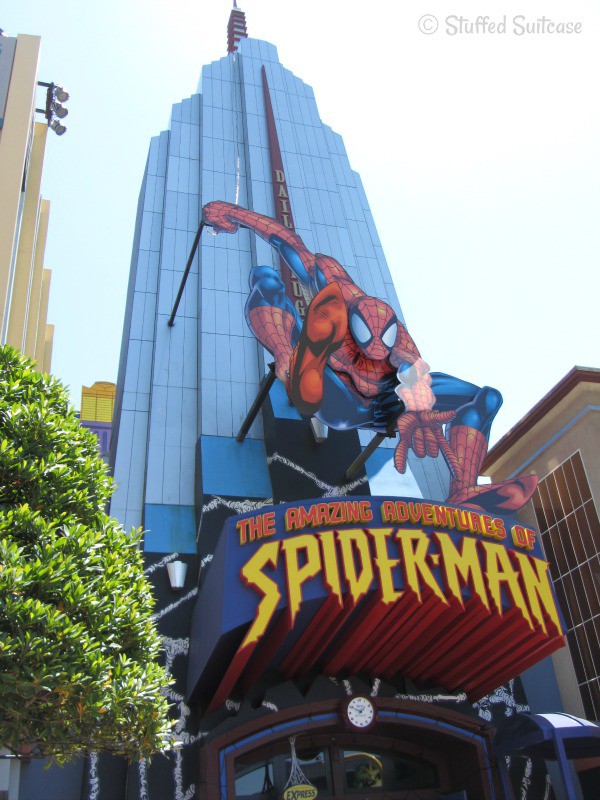 Islands of Adventure is home to the first Wizarding World of Harry Potter land called Hogsmeade. It contains the main attractions of Harry Potter and the Forbidden Journey™, Dragon’s Challenge, Flight of Hippogriff, and Ollivanders™. The success of Ollivanders™ appears to have not been expected by Universal as there is often a long line for the store’s “show”. Small groups are admitted into the shop where a special guest (yes, only one) is chosen to go through the process of finding the perfect wand. For a true HP fan, it’s a must see. And don’t forget to grab a Butterbeer while in Hogsmeade! Don’t worry, it’s kiddo friendly (no alcohol).

Read more about the Islands of Adventure from my friend, Amber.

How Much are Tickets to Universal Orlando Resort?

You can buy single park tickets or park-to-park tickets which allow you entry to both parks on the same day, as well as theme park and waterpark tickets. You can also buy vacation packages which include hotel, tickets, and breakfast. As of writing this post you can expect to spend around $180 per adult for your tickets. Additional days come at a cheaper cost, so one day might cost $180 but two days might only cost $260. Kids, considered ages 3-9, are slightly lower (about $10 less) than adults.

Get Discounted Universal and Disney Tickets at Undercover Tourist!

Read this post for more ideas on getting discounted Universal tickets.

And here’s a guide to help you plan a two-day trip to Universal Orlando.

The most popular restaurants and shopping combined with vibrant street nightlife, add in some mini-golf, a movie theater, and the Blue Man Group and there you have a glimpse of City Walk. This is the perfect spot to hang out and stroll with your honey or catch a delicious bite of food. Our family went to the Blue Man Group show and it was such a fun interactive and comedic show. There are a few very minor PG parts, but I really was amazed at how interactive the show was. The audience was often laughing and let’s just say the end is jammin’!

Our family loved our time at the Universal Orlando Resort and will definitely plan a return visit. I hope I’ve helped share some information that will help you understand the layout of the resort and all the amazing things there are to do there. Please feel free to ask any questions and I’ll do my best to answer.

So, just got to ask…who’s a Harry Potter fan and did you prefer the books or the movies?

Thank you to the Universal Orlando Resort for providing tickets to our family to experience your amazing resort and the Blue Man Group. All thoughts and opinions on our experience are my own honest reflections on our visit.

So if we buy 1 day general Universal tickets, we can go to Harry Potter world without buying additional tickets for that? And can ride the Hogwart's Express too? Or is that additional? Yes, it's confusing!

You have to have the park-to-park ticket to ride Hogwart's and to see both Hogsmeade (in Islands of Adventure), and Diagon Alley (in Universal Studios). You can do as much as you're able in both parks in one day as long as you have the Park-to-Park ticket. Does that make sense?

We lived in Orlando for 8 years, and Islands of Adventure was our favorite theme park! Which park did your girls like better?