Our Family Caribbean Cruise on Norwegian – Part 4: Activities Aboard

While we had so much fun enjoying the different ports of call; activities aboard the ship were also fabulous. One of our favorite things to do was watch the evening shows. Each evening they featured a special and unique show including musical numbers, magic, and comedy. The Stardust Theater is a beautiful venue and you really have no idea that you’re onboard a ship when you walk through those doors. The props, lighting, sound, décor, and seating are all what you’d expect to see at your favorite downtown theater venue.

Shows aboard the Norwegian Pearl

They have a regular cast of singers and dancers who participate in many of the shows, with four main “stars”. I was a little curious as to whether the girls would be interested in the shows and whether their attention would be held by the performances. It was better than expected. Grace and Faith loved visiting the theater and looked forward to the performance each evening. One of their favorite nights was when the ‘Oh What A Night!’ group performed. They’re a Frankie Valli and the The Four Seasons tribute band. They were wonderful and one of their CDs now lives in our home. The performances were billed as “family-friendly” and we agreed for the most part. There was a comedy night with the cast from The Second City, which we chose to go to without the girls. We checked them into the Aqua Kids Club, which they loved!

The Aqua Kids Club was an unexpected gem during our time on the Pearl. We were going on the trip to spend time together as a family, so we didn’t have plans to use the kids club. However, the girls asked to check it out when they saw it, and we agreed. From then on, they continually asked to spend time in the club. They were entertained and engaged during their time there. The staff at the kids club weren’t just babysitters…they actually enjoyed having fun with the kids. During the week the kids were encouraged to learn circus acts to perform for the kid’s circus show on the final cruise day.

The circus show was a great joy and such a neat experience for the girls. I just want to note that the kids club is a free service; however gratuity is encouraged on the final day. Your ship gratuities do not cover the staff in the kids club.

One other neat experience we took part in aboard the Norwegian Pearl was climbing the rock wall. Our whole party did it, including six-year old Faith! There were three difficulty levels on the wall, and you picked your “path” depending on how hard you wanted it. Everyone is harnessed and a staff member is holding your catch rope all the time. Faith was mostly “pulled” up the wall by the staff member. We were glad we took advantage of the climbing early on, because the rock wall was closed down during many of the days due to strong winds. I recommend doing it early, in case you have a similar situation. Also, remember to wear socks! They give you special shoes to wear, but everyone must have socks.

We also enjoyed some time at the pool. The Pearl has one waterslide as well as a pool and a couple of hot tubs. We didn’t get to spend as much time as I had planned poolside, but we were just too busy enjoying other amenities and shore time. I have to wonder at the size of the pool deck for a ship that size. We were told our cruise had a very low number of kids compared to the upcoming week (Thanksgiving week) and I don’t honestly know how that pool deck would have fit more kids and parents. It always seemed busy and the lounge chairs were filled on the sunny days. Perhaps it’s not a problem, but I’d not plan for a lot of pool time if I was traveling during a peak holiday period.

These were just a few of the fabulous activities aboard the Norwegian Pearl. We really enjoyed our family Caribbean cruise and look forward to our next one! Check out the previous posts about our Caribbean cruise, “Part 1: Car Rental & Arrival” and “Part 2: Stateroom & Dining“ and “Part 3: Ports of Call“. 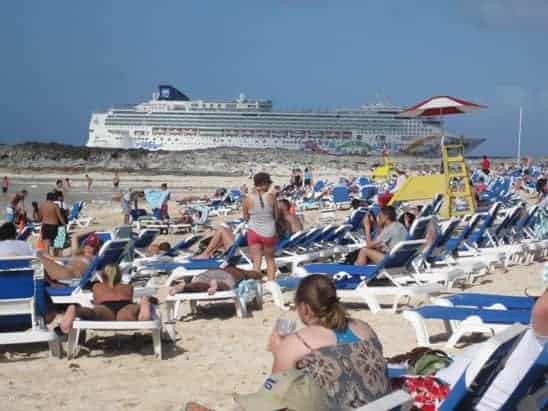 Next →
Taking Kids Out of School for Vacation?
Click here to cancel reply.

I WAS ON THAT CRUISE. WHAT A FUN TIME. I WISH I COULD REMEM THE NAME OF THE TRAPEZE ARTISTS.....