Hotels by Disneyland: How to Choose Where to Stay

Perhaps you have a huge Disney fan in the family, or maybe you feel it’s a childhood right of passage, whatever your reasoning there is a chance you’re planning to visit Disneyland. Especially if you’re reading this! My Disneyland story began in the summer of 1989 with my first visit to Disneyland. My mother took me to visit my great aunt and uncle who lived in the area, and we had a fabulous getaway touring the area attractions. Looking back I can remember the long lines and hot weather from our summer visit, but I also remember how much I loved the Haunted Mansion and how I begged my great uncle to wait in the long line two more times so I could ride it again.

Our first family vacation to Disneyland in 2008

My Disneyland story began anew with my own children in 2008 when we took our first family vacation to the Disneyland Resort. That trip and my five subsequent trips since have given me a huge insight into the hotels by Disneyland and tips for helping families choose where they should stay.

The Disneyland Resort has three on-site hotel properties, and they all have their own unique attributes. While you can say that they are on a pricing tier structure starting with Paradise Pier, followed by the Disneyland Hotel, and the Grand Californian as the deluxe option, all three have view room options that can affect your room rate. Staying on-site at Disneyland is a great option for families who want to get the full Disney experience, have easy access to the parks, gain park benefits like early admission and package delivery, on-site dining options, and fun family pools.

This high-rise beach-themed hotel overlooks Paradise Pier in Disney California Adventure and has some amazing park view rooms. We stayed in a view room on the 11th floor and loved watching the lights on the pier and World of Color on our early-in nights. Many of the rooms also have a little daybed couch that can work well for families of five. The pool is a rooftop pool on the third floor and you can book a poolside or cabana room. There’s also a character breakfast called “Surf’s Up” featuring Lilo & Stitch. Tip: for a shorter walk, ignore the street direction signs and head into the Grand Californian then follow the park signs from there.

CONS: Across the street so less “in-park” feel, fewest rooms of the three resort hotels. 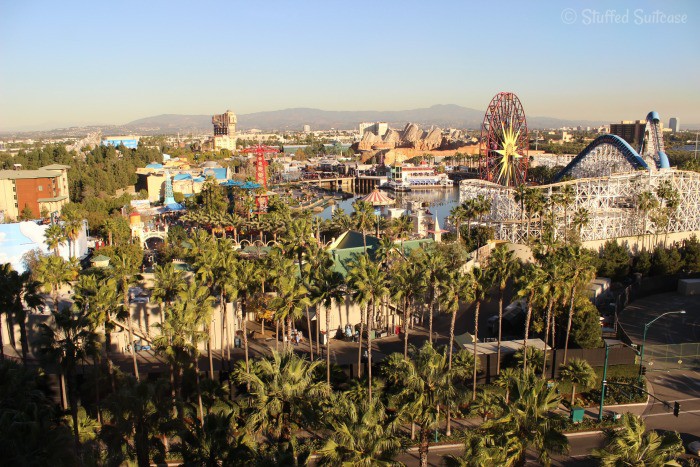 Our view of California Adventure Park from Paradise Pier Hotel

The classic and oldest hotel at Disneyland went through a major renovation in 2011 bringing it into the future and making it a favorite amongst guests. You’ll find the Disneyland Hotel at the end of Downtown Disney which makes it a bit of a walk, but what a walk it is! The hotel features a great new pool area that includes fabulous monorail waterslides as a memory throwback to the early days of Disneyland. Each room has a eye-catching headboard that features Sleeping Beauty’s castle and includes fiber optic light effects that mimic fireworks over the resort.

Describing this hotel as grand is a fitting adjective. The Grand Californian is themed as a upscale, craftsman lodge getaway. Especially at Christmas time, the hotel is absolutely stunning. The Disney theming is done in an upscale and minimalist way that keeps you feeling like you’re on site, but still keeps an elegant appearance. Everything at the hotel has the woodsy, arts & crafts feel and makes you feel like your in a national park instead of Disneyland. The Grand Californian is also the hotel closest to the park entrances and has a private park entrance into the California Adventure park. If you’re into people watching and live music, consider splurging on a Downtown Disney view. We stayed here and fell in love with the proximity to the parks; great for taking midday breaks or just having convenient walks into the parks. Tip: If you’re looking for the shortest walk, request a room near the lobby.

CONS: Most expensive, some rooms are distant down “never-ending hallways”.

The compact size of the Disneyland Resort allowed for many hotels to move in very near to Disneyland, a lesson Disney learned from and accounted for when buying land for Disney World. Below you’ll find a map I’ve created of the hotels by Disneyland. You can save money by staying off-site, and some hotels are technically closer walking distance than some of the on-site hotels, but you will lose out on some of the on-site benefits like early entry and package delivery. Here’s a map of hotels by Disneyland to help you visualize and plan where to stay.

Map of the Hotels by Disneyland

Black Starburst: This is the main plaza entrance for the two Disneyland Resort Parks, Disneyland up top (north) and California Adventure is below (south).

Red Star: Main Pedestrian Entrance (although you can get to the parks from S West St by entering from Downtown Disney walk or Grand Californian). Check out this Google street view for a visual: https://goo.gl/maps/MJimD 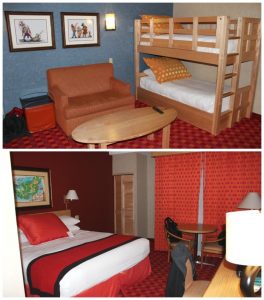 5: Howard Johnson Anaheim (HoJo) – this is a very popular hotel amongst families due to it’s water playground and family suites. We’ve stayed at this property and while it looks distant, it’s a very manageable walk (~15 min) for the average family. Just remember how little ones might be feeling after a full day at the parks. We were also able to view the fireworks from the hotel and they have some rooms that have a fireworks view.

6: Anaheim Plaza Hotel & Castle Inn & Suites – this area also has other hotels and the GardenWalk shopping district. Just be careful if you plan to walk from a hotel near these two, because there are fences and walls that force you to walk to Katella to then walk over to Harbor.

7: Candy Cane Inn & Desert Palms – in my opinion these are the farthest hotels you’d want to book for a “walking” distance hotel. There are also hotels along Katella, just keep in mind where the main pedestrian entrance and Grand Californian entrance are located. You will have a bit of a walk.

If you really appreciate the Disney vacation feel and want nice hotels then staying on-site is definitely worth it. Looking to save money or do you have a big family (and don’t mind a bit of walking), then you might want to stay at one of the hotels across the street. Another option is to divide your stays between a Disneyland resort hotel and a more budget friendly hotel, or choose one of these Carlsbad hotels to add some beach time and LEGOLAND to your vacation.

Remember that this year Disneyland is celebrating their 60th Anniversary with the Diamond Celebration which begins May 22nd, 2015. Three sensational new nighttime spectaculars will dazzle guests and Sleeping Beauty’s Castle will glitter and gleam. 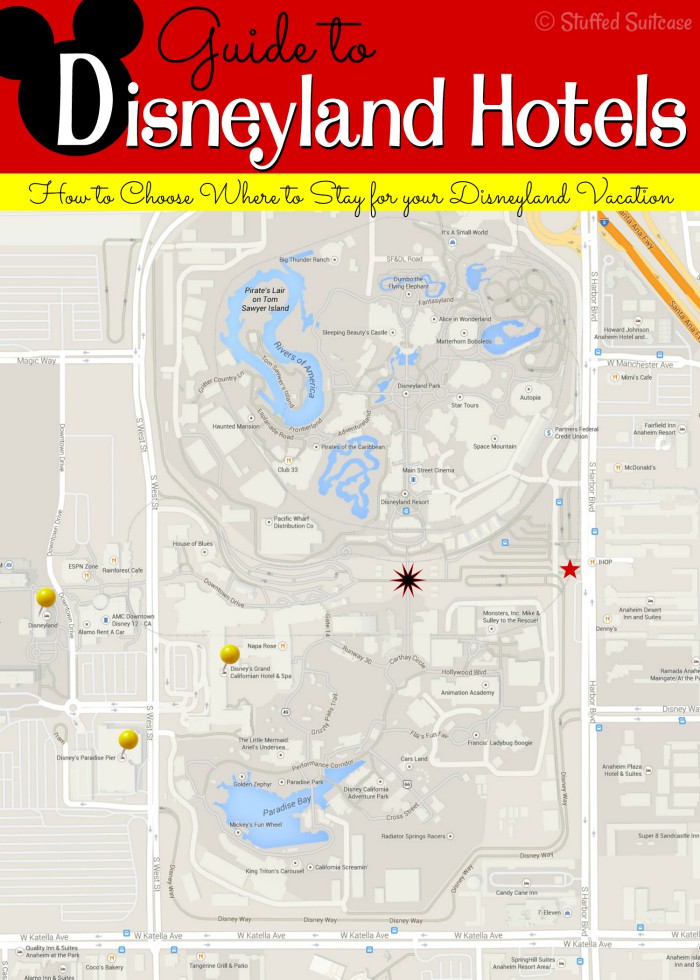 Guide to understanding the Hotels by Disneyland

[…] in the Hollywood scene and would rather take it easy on your first day, head straight to your hotel by Disneyland. I definitely recommend staying within walking distance, even better if you can stay onsite at one […]

This is the most helpful piece of information I have found after spending hours upon hours looking for where the pedestrian entrance was and the closest walking distance hotels.... either my search abilities are lacking or you are sheer amazing!! I'll say you are amazing!

One Week Southern California Itinerary with Disneyland and San Diego

[…] in the Hollywood scene and would rather take it easy on your first day, head straight to your hotel by Disneyland. I definitely recommend staying within walking distance, even better if you can stay onsite at one […]

Thank you for the information on Disney hotels! This will come in handy for my next trip :)

You're welcome Jaclyn! Hope you have a fabulous trip when you go!

I've always wanted to stay at a Disneyland hotel! Thanks for the suggestions :)

Hope you can take a trip there soon. We've loved our Disneyland vacations!