Do you have a Disney fan in your home? Today I’m sharing a fun DIY craft that goes along with the new Disney Channel Original Movie, Descendants. This shop has been compensated by Collective Bias, Inc. and its advertiser. All opinions are mine alone. #Disney #VillainDescendants #CollectiveBias.

As the mom to two girls, the Disney Channel is a popular tv channel in our home. My girls have been fans of many of it’s shows, and lately they’ve been looking forward to the brand new original movie, Descendants. The movie debuted on the Disney Channel on July 31st, and after being on vacation we headed over to Walmart and picked up our own DVD to watch. The girls were especially excited about the free Descendants bracelet that was included in our DVD package!

Descendants is a story that follow the descendants of the popular heros and villians of past Disney movies. The title characters are the daughters of the Evil Queen and Maleficent, as well as the sons of Jafar and Cruella de Vil. And my favorite character, Belle, has a part in the movie too! Wait until you watch your favorite evil villains teaching their kids to be cruel and reach for power. You’ll also get to see the kids of the classic Disney movie characters, like Cinderella’s son, as they try to live alongside the villainous kids. I don’t want to give away the movie, but if you’re a Disney movie fan, you must watch to see what happens as these heros and villains clash once again.

My girls have watched the movie multiple times since we purchased it, including inviting all their friends over to watch it too! I must say that if you’ve got a tween girl in the house, this movie is a pretty solid bet for success! There is also a CD movie soundtrack available at Walmart, which is a must have for fans of the movie. The songs are so catchy that even adults will find themselves singing along; I find myself singing about being “rotten to the core, core, core…” 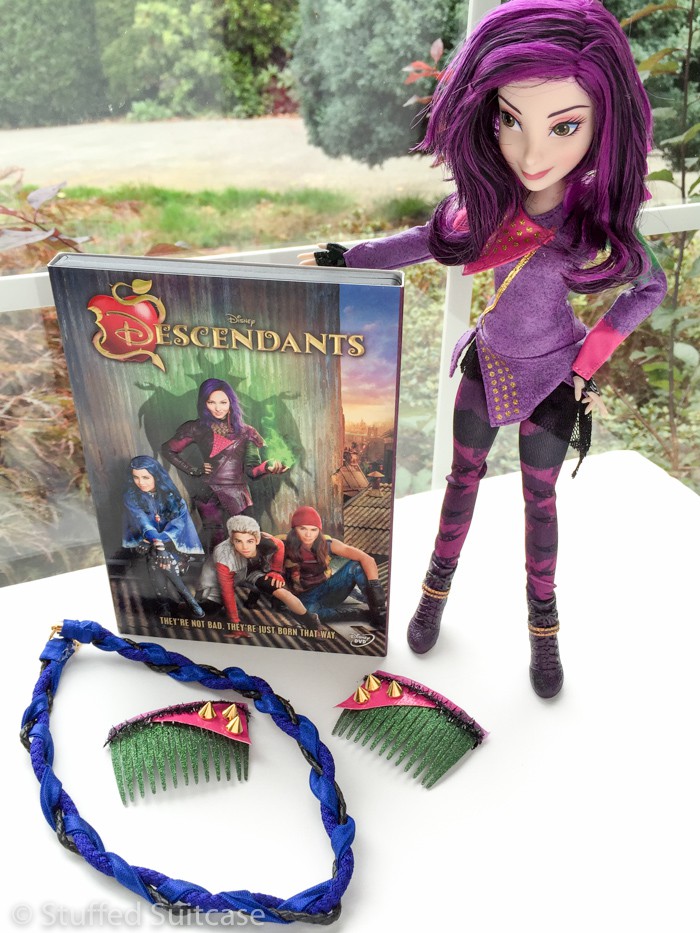 Disney Channel Descendants hair accessories are great to go along with the movie and Disney fashion dolls of Mal and Evie!

After watching the movie so many times my girls have really fallen in love with the characters of Mal and Evie. Their names might give you a hint, but Mal is the daughter of Maleficent, and Evie is the daughter of the Evil Queen. They both have some amazing costumes, which already has my girls thinking about halloween costumes. Faith fell in love with the Mal doll which we picked up at our local Walmart, and I decided it would be fun to create some hair accessories to play off the great colors and textures of these two fun characters who have won over my girls.

Let me start with showing you the fun hair combs I made to represent the character of Mal. Mal has the primary colors of purple, pink, and black, with a shot of emerald green. Remind you of any ferocious dragons you once knew??

I found this great spray paint that was glitter green and it seemed like the perfect match for Mal. I bought a package of hair combs and took two clear ones to spray paint with the glitter green. After the paint was good and dry I rubbed the combs with some paper towels because there was some glitter that rubbed off (not paint, just pieces of glitter).

After drying I decided to add the pink pop with duck tape. I wanted to do a triangular design to mimic the triangle on Mal’s jacket. I folded a strip of pink duct tape in half, leaving a sticky portion visible for attaching to the comb. Then I cut a diagonal line from the folded part to create the triangle that would attach to the comb.

Next I found these gold spikes at Michaels (in the halloween collection) and thought they’d be a great fit to match Mal’s jacket spikes — although now I think it might have been better with a smaller size spike. If you don’t like this size, you could look for smaller sizes or perhaps use brads or sequins instead.

Lastly I wanted to find some purple and black to add, and this halloween ribbon was the perfect fit! I used hot glue to affix the ribbon to one side of the comb, then added another strip along the backside which made the ribbon wrap around the top edging.

And, they’re done. Both my girls love them and think they look like they’re a perfect match for Mal. I’m pretty happy with how they turned out too!

They also look lovely in Faith’s hair and she feels quite special carrying around her Mal doll while wearing her hair accessory. I like how the pink triangle is loose so it can lay over the hair a bit. And the comb can be set so that the green is still visible, which was one of my worries. I’m not sure how this would work for thicker hair, so make sure the combs work for your child’s hair. If not, consider recreating with a clip or hair claw.

Next up I wanted to treat Grace to a hair accessory for Evie to match her favorite color, blue. Evie is the daughter of the Evil Queen, and she already has a pretty hair feature that we decided to recreate for Grace. Evie has a fun braid accessory that runs from her forehead back into her hair. Coming up with this idea was a little harder, but it turned out well, and it was super easy!

To create Evie’s braided look I wanted to make a crown/necklace design that would set on the crown of the head and then run under the hair in the back to make it look like Evie. I purchased three types of cording, with a preformed blue cording necklace being the base for the piece. Then I added in the black leather braided cording and blue shiny elastic cording.

I hot glued the leather braided cording and the elastic blue cording to the gold metal piece on the necklace. Then I cut another piece of blue elastic to wrap around the glued parts to create a more finished look and to add some additional glue for stronger holding.

Make sure when you’re cutting the cording that you cut it a bit longer than the necklace since the braiding will take up some length. I think I allowed an additional 5 inches and had some leftover. As I braided I folded the blue elastic in half and just did a traditional braid of each strand. I finished it off with hot glue and again wrapping the blue elastic around the end for a finished look.

The leather cording allows a bit of bending so you can create a point at the front to mimic the point on Evie’s hair braid. I think that some bobby pins will be perfect for securing the piece to your child’s hair, especially good for playdates or halloween costumes! Grace loves her braid and thinks it is a great match for Descendants Evie.

Now both girls have fun hair accessories to match their new favorite characters from Descendants. I’m sure we’ll be watching this movie many more times, and I can hear the soundtrack playing as I type this post. If you have kids who want to dress up as Evie or Mal for halloween this year, these hair accessories will be the perfect fit for their Descendants costume!

So, if you’ve got any Disney fans in your home, head to Walmart and pick up your own DVD and soundtrack. And if you’ve got doll fans in the house, head over to toys and choose your favorite Descendants fashion doll to join your family for movie night!


Tell me, who is your favorite Disney hero or villain? Do you ever find yourself singing along with Disney songs?

Where did you get the cording and things to make Evies braided hair piece?

I picked those up at Michaels crafts in the jewelry section - with all the other cording.

Of COURSE I always sing along to Disney songs! :) my daughter has seen the movie only twice and she already sings the opening song all the time. Kids are crazy when they love something, right? I love the hair accessories you created! I might need the hair comb for myself! #client

Disney really does an amazing job with their music! Glad you like the comb too -- it was one of those rare projects where what I dreamed up actually became reality! Thanks so much for stopping by to comment.