10 Ways to Discover the Jewel of San Juan Island

Rocky coastlines and sandy beaches, country roads and main streets, all come together to create what has to be a true gem of the west, San Juan Island. One of the most popular ways to reach the island is via a Washington State ferry, and upon the approach you’ll see that the island history of being home to a simple port village, Friday Harbor, has been remembered and cherished by the harbor residents. 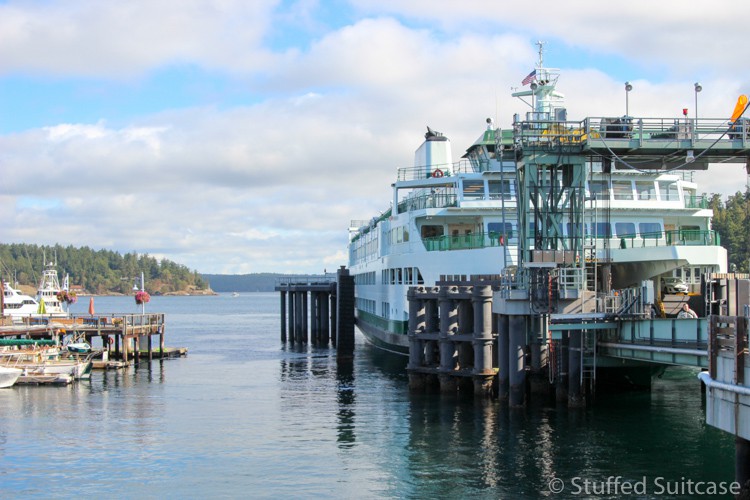 While San Juan Island is the most populated of the San Juan Islands, which also includes Orcas, Lopez, and Shaw Islands, it is still remote enough to let you get away from the masses and enjoy some downtime. But don’t be fooled, this rural island community is packed full of activities, here’s a sampling of just how diverse a vacation to San Juan Island can be. 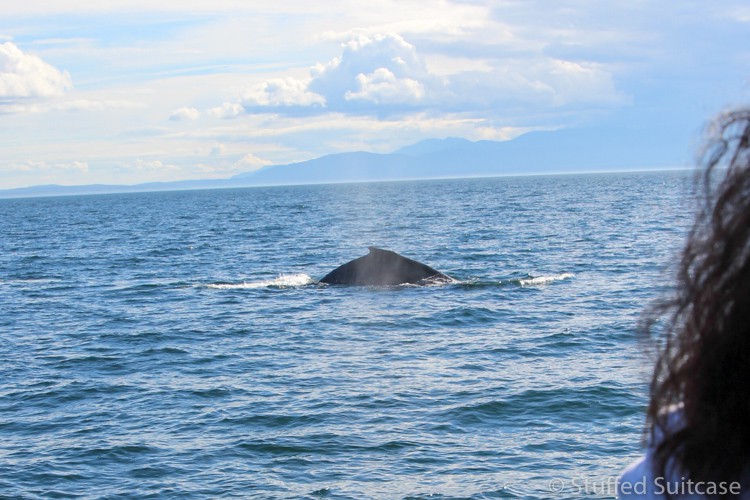 Probably one of the biggest draws for the islands is the resident and transient whales. Three orca pods are considered resident orcas and can often be seen from late April through October. But there are transient whales that can be seen year-round, and you might catch a glimpse of other species such as gray, minke, or humpback whales. During my September trip, we came upon two humpback whales while riding aboard the Puget Sound Express, taking us from San Juan Island to Port Townsend. 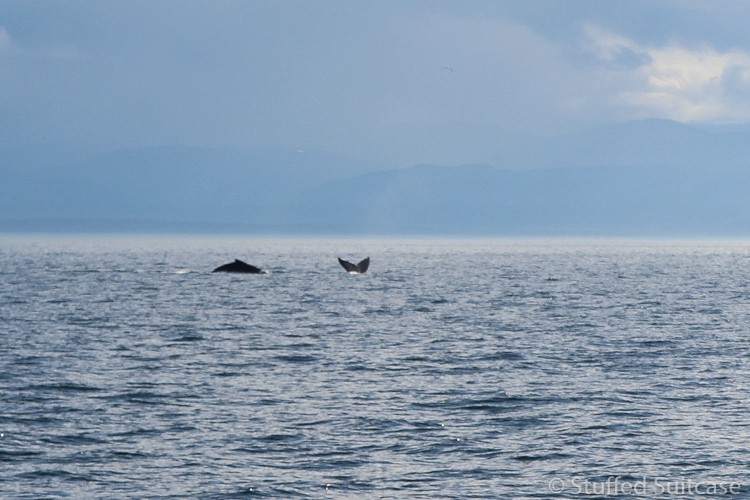 You’ll find quite a few options for whale watching, but the local companies care deeply about the resident orcas and will adhere to the federal and state laws that mandate their behavior and interaction with the whales. The southern resident whales are endangered, so a good tour operator will obey the laws and maintain a 200 yard distance, which is surprisingly close when you’re watching whales that are larger than your boat.

The beauty of San Juan Island can be found while strolling down Friday Harbor streets peeking in and out of the simple shops and restaurants, but also in the natural woods and vistas that dot the small island. Work up an appetite with a hike up to Mount Finlayson, the highest point on San Juan’s south end that boasts expansive views of Haro and Juan de Fuca Straits from it’s summit.

Head over to Lime Kiln Point State Park, also known as Whale Watch Park, for a chance at glimpsing whales and other ocean wildlife from land. You can also venture out through the trails to find the old lime kilns that give the park it’s name, as well as a view of Vancouver Island. Don’t forget to snap a photo at the 1919 lighthouse which is still operating. 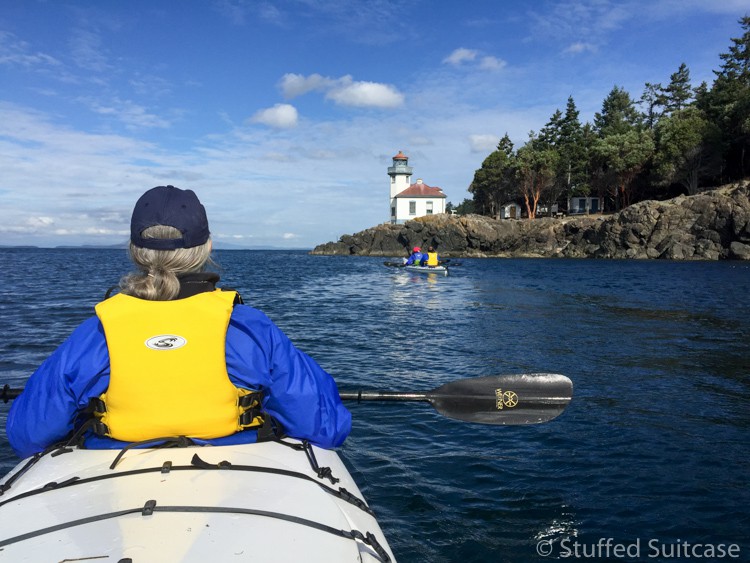 One of the signature adventures for the San Juans has to be sea kayaking. This was one of the most exhilarating, and tiring, activities of my trip. Seated in a tandem kayak, and outfitted with cold-water gear, our guide from Discovery Sea Kayaks led us on a roundtrip journey from Smallpox Bay at San Juan County Park along the coast to Lime Kiln State Park and back.

Discovery Sea Kayaks has a minimum age of 12 for participating, and I think that’s a good rule. Even with a double kayak, the current and waves can present a challenge and two strong paddlers makes the trip much more doable. They also don’t allow more than 8 people, 4 double kayaks, for a tour which is great in my opinion. I saw one group of 16 people with another tour company and I think that makes for a bad tour in that you can only move as fast as the slowest person, and the guides like to point out facts and wildlife and you need to be close by to hear what they’re saying.

One tip could be to go for an early morning tour since we only had a group of 4 for our tour, which the guide suggested could have been because of the time of day. 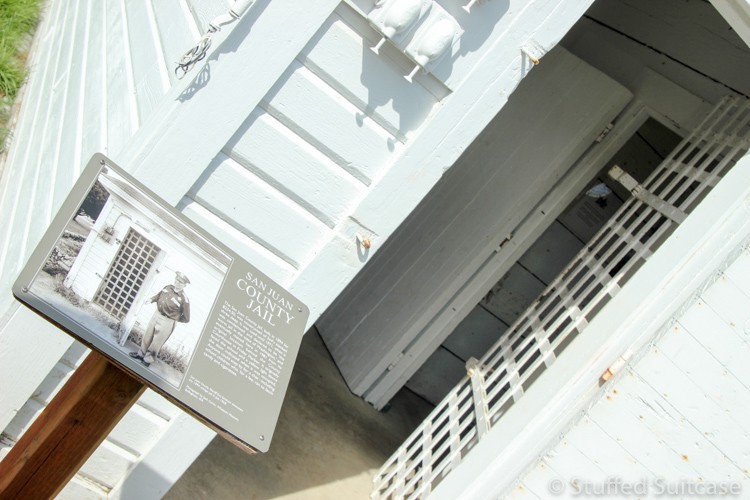 San Juan Island has a wealth of history for those looking to dig a little in the past. Starting off there’s the San Juan Island National Historical Park which has a fun history having to do with what is termed, the Pig War. It was formed in 1966 to commemorate a dispute between American and British soldiers and includes an “American Camp” and “English Camp”.

Another fun spot for island history is at the San Juan Historical Museum, located on a former 445 acre homestead of an island farmer. The curators have been collecting unique pieces of history for you to look at and will share fun stories of the island’s history, including a peek into what was named Washington’s worst jail. 2016 will be their 50 year anniversary, so be sure to check out all the fun activities they’ll have planned for celebration.

There’s another new museum currently in construction that will be a true delight for visitors thirsting for island history. I was able to get a sneak peek into the Museum of History and Industry, and see their plans for celebrating the island’s history in lime, logging, farming, and fishing. We’ll have to wait for another couple of years for it to be completed though, so don’t get too excited yet.

Wine tasting in an old schoolhouse at San Juan Vineyards

Mix a little old with the new with a visit to San Juan Vineyards, a 30-acre vineyard and tasting room. The tasting room is actually the old island schoolhouse from 1896 and you’ll see that all the interior wood is original to the building. Architecture lovers will have a hay-day wandering around inside. I stared at the floor for a good five minutes.

The winery serves a variety of wines, including their award-winning estate-grown Siegerrebe and Madeleine Angevine. And, the winery is currently for sale, so if owning a vineyard is on your bucket list, make it happen! 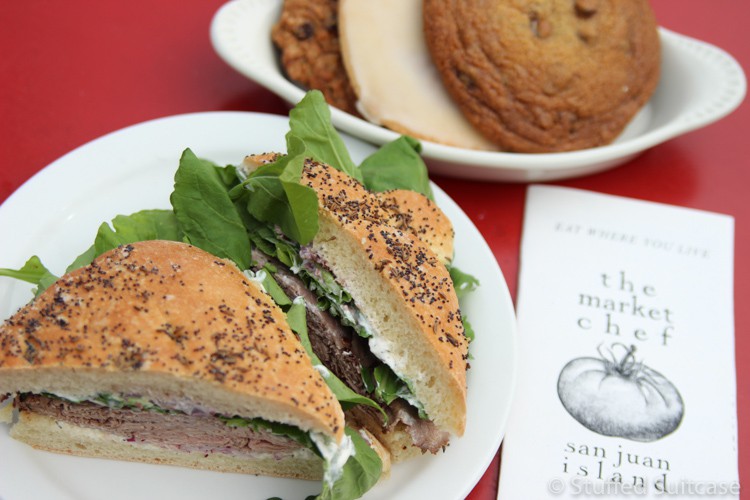 There are many small, one-of-a-kind eateries dotted around Friday Harbor, and you’re sure to find one to entice your tastebuds. I highly recommend the Market Chef, a small, family-owned cafe that looks out over the harbor. This high-traffic cafe is popular with the locals, and the food is phenomenal, featuring many local breads and crops. Order a sandwich, choose a tasty side from the deli case, then make sure you leave room for dessert.

Each October foodies can rejoice when the San Juan Islands (collectively) host what is known as Savor the San Juans, a month-long culinary adventure featuring wine tastings, harvest festivals, farm tours and events, plus specials at some of the best lodgings and restaurants. A great stop for those looking for a post summer getaway. 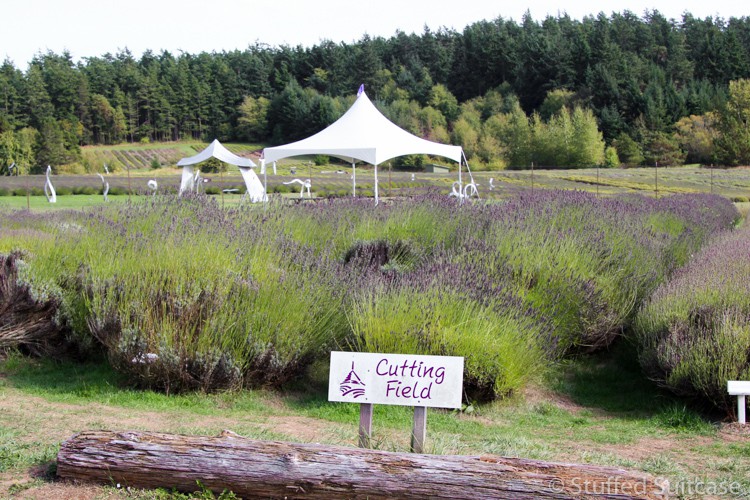 One man’s passion for the island has turned into a local of beauty and commerce. Pelindaba Lavender Farms is a 25-acre breathtaking operation that was created out of the desire the owner, Stephen Robins, had for island conservation. Pelindaba is a Zulu word that means a place of great gatherings, a vision that seems to have come true for the founder.

With no plan for product creation orginally, the value of lavender oil and it’s health properties eventually led to the creation of products, and an industry. Pelindaba now employs 30 island families, and the owner, a former physician, feels strongly about the positive impact lavender oil has on health and family well-being.

Special occasions include the lavender festival which occurs around the third weekend in July, as well has the harvest which happens over five to six weeks in September. 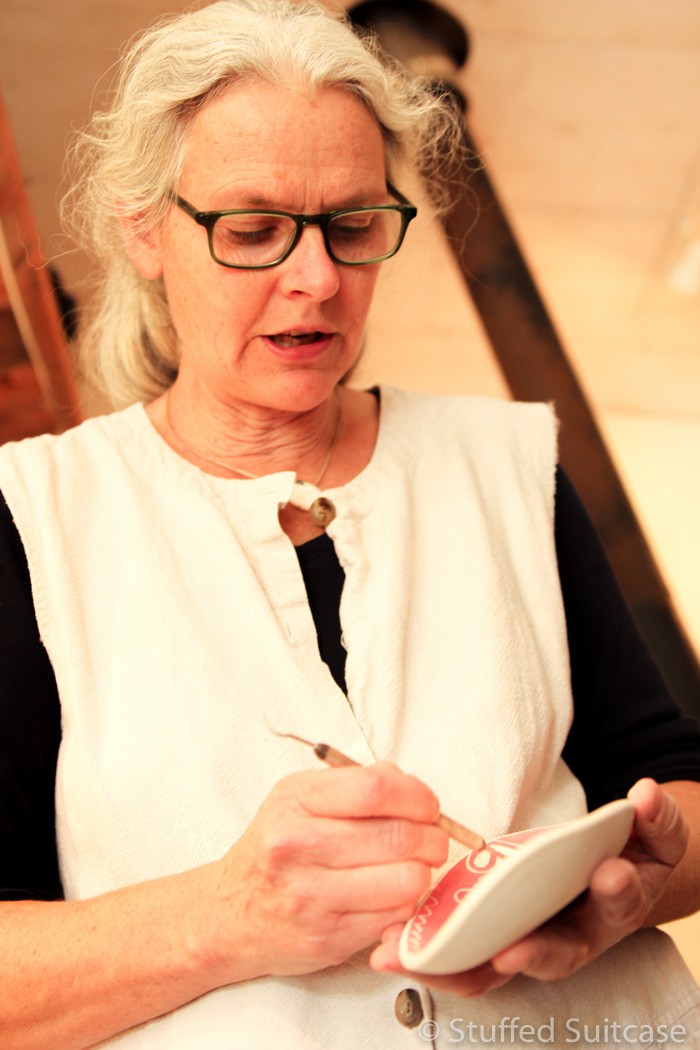 One of my favorite parts of my journey to San Juan Island was meeting with a working potter, Paula West. Her studio has both products as well as the opportunity to see an artist at work. While there I watched as she touched up a new piece featuring her signature “doodle” design.

We love collecting pottery at destinations we visit, and buying directly from a local is a special treat if you too love pottery. Pottery also makes an excellent wedding gift, practical yet memorable for the couples’ new life together.

Pottery isn’t the only type of art featured on San Juan Island. Surprisingly this little hamlet town is a hot bed of artistic talent including the beautiful, new San Juan Islands Museum of Art (IMA) gallery. The building itself is a work of art to my architecturally-loving soul, but once inside you’ll be amazed at the beauty showcased in the 3 rotating galleries. There are currently no permanent exhibits, so each visit could bring a new design and discovery. Families can look forward to Family Art Days in the summer to help share the love of art with your children. 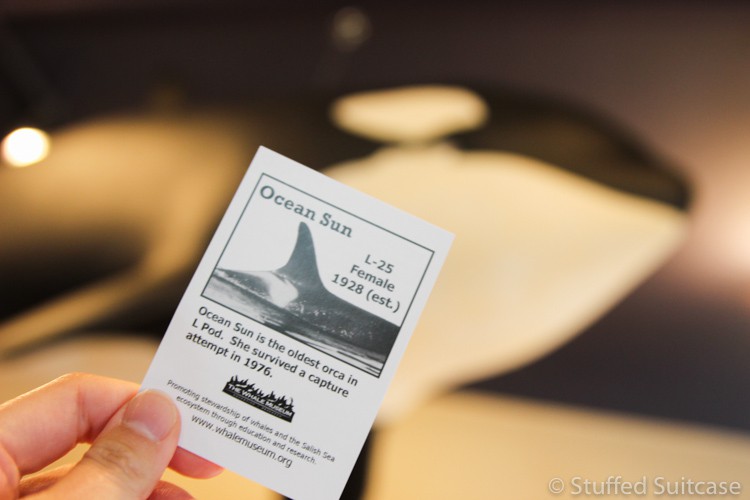 Learning about whale conservation at The Whale Museum in Friday Harbor

Lastly, a stop into the Whale Museum is a definite must for adults and families alike. This is the first museum whose focus is on whale stewardship, not whaling. Extensive displays share about the tracking and information of the resident and transient orcas, as well as encouraging people to see how we can be “whale wise”. Families can plan a visit in the summer to take part in Pod Nods, an overnight camp for kids. Plus, the gift shop is stocked full of treats including some wonderful books that will help keep you dreaming of whales even after you depart.

As you can see, don’t be fooled by the small town charm of San Juan Island. It’s bursting with activities and attractions that will charm you and might even make you wish you were living the island life.

Thank you to the San Juan Islands for hosting me on this trip. All photos and opinions are my own. For more information on the San Juan Islands, recently named one of the top islands in the US by Travel + Leisure and Trip Advisor, visit their website and plan a trip! 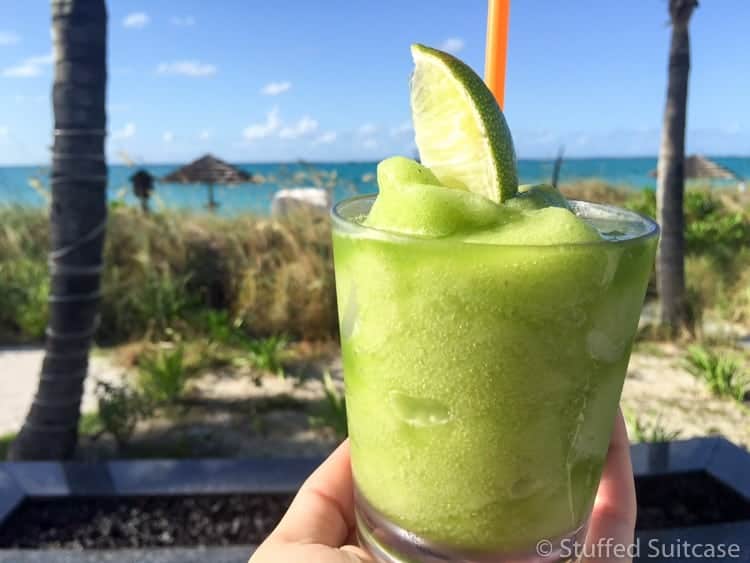 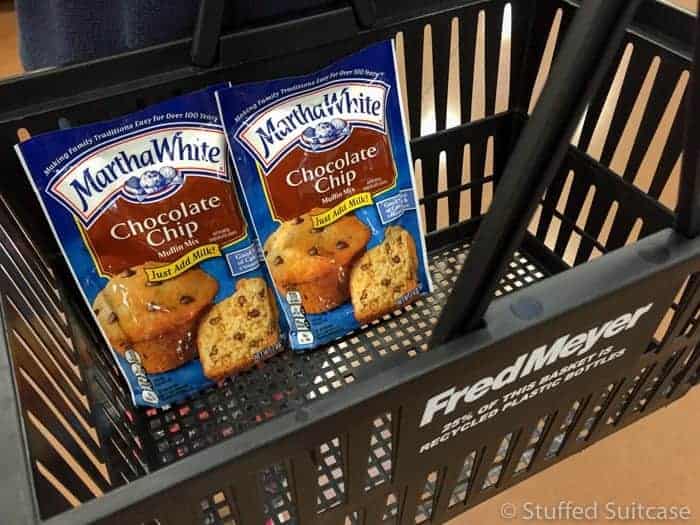 Next →
I Now Enjoy Shopping with My Kids
Click here to cancel reply.

This site uses Akismet to reduce spam. Learn how your comment data is processed.

It was seriously amazing! did you see whales close enough?

Very interesting! Would love to learn more about the history of this island, thanks for sharing.

It's a beautiful island to explore and I'm sure the local visitor's bureau has a lot of historical information.

Thanks for sharing such great photos. The San Juan Islands are one of Washington's greatest treasures. You can't help but have the time of your life out there. Thanks again for photos that really do the island justice!

Great article! San Juan Island is gorgeous and has tons of great things to do. You make it sound so fun!

Thank you! Really was a great little island to discover!

This site uses Akismet to reduce spam. Learn how your comment data is processed.